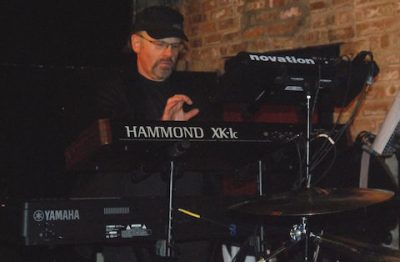 Allan began his professional career in 1979, as a member of Under New Management – a top-40 / variety touring act. Upon returning to his hometown of Chicago, IL, he immersed himself fully in the jobbing and studio scene. Over the course of the next decade, Allan worked for a variety of cover acts, and also recorded with several original music projects. During that time he also completed a B.A. in music at Columbia College.

Moving into the 1990s and beyond, Allan saw his role as an area keyboardist expand significantly. He became a go-to player for several acts on the regional venue / festival circuit, including: Five Guys Named Moe, Perry Danos & Backstreet, and Frank Paul (Gone To Paradise). Throughout 1996-1997 he toured with the Roy Waddell band – based in Nashville, TN. About that time, Allan’s demand as an area session musician grew. His keyboard work was heard on radio and TV spots for Spiegel, Kraft Foods, Gerber, McDonald’s, et al.. In addition, he composed and recorded music for area documentaries and industrial videos. He also recorded with several regional country and americana artists, including Tim Teague (Jerrod Niemann), Frank Paul, Bert Cattoni, and Roy Waddell.

After six years of working in the country and rock scene in Denver, CO, Allan returned to the midwest in 2014. Currently he covers the keyboard chair for several area acts, including: Island 49 (tribute/rock), Perry Danos & Backstreet (classic rock), and Solid Ground (adult contemporary/gospel). In addition, Allan is on the teaching staff at Front Porch Music in Valparaiso, IN. And he continues to keep busy in the studio with a variety of projects.

The Hammond Sound has been an indispensable part of Allan’s live and studio rigs for many years. Of the XK-1C he says, “This keyboard is a steam locomotive hidden inside a teakettle size package. Love it !”