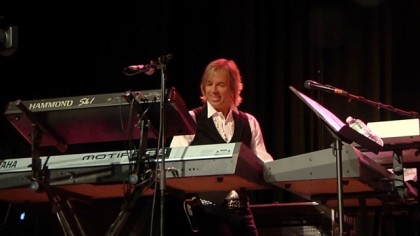 Love my Hammond SK ! It’s got all the things I like, from dirty distortion to true Hammond sweetness. I’m using it on tours with The Moody Blues and  Justin Hayward’s solo tour, and it’s performed great.

Hewitt began his career performing in the club scene but quickly graduated to the production room, where he had the honor of working as a producer alongside Maurice White of Earth Wind and Fire (EWF) for over half a decade with EWF’s Greatest Hits album going platinum in 2000. However, it was co-writing and piano/B-3 contributions on the triple platinum record Cherry Pie with Warrant that would solidify Hewitt as a monster musical talent capable of crossing genres.

Hewitt’s list of record production credits as both a producer and recording artist spans across the various major labels and genres with over 12 million records sold.

As a solo artist, the uniqueness of the Hewitt signature sound lies in his ability to draw from the diverse worlds of contemporary jazz, pop and rock, while simultaneously bridging the gap between instrumental and vocal music, with intoxicating stage performances that are a fusion of energy, style and grace. It was his 2004 release, Noche de Pasion, that marked his emergence on the pop instrumental scene, which was followed by his critically acclaimed 2006 release Metropolis. The Baltimore Times hailed, “Metropolis is the album to put in your CD player (then turn up the volume).”

Since 2010 Alan has been the keyboardist on tour with legendary rock band, The Moody Blues whom have been on a continuous world tour performing for sold out audiences . Some of the performing highlights include Late Night With Jimmy Fallon. Red Rocks in Denver, O2 Arena in London, Heineken Center in Amsterdam, Coca Cola Center in Johannesburg S. Africa, two Moody Blues Cruises and so many other special moments with more to come.
Alan also played keyboards on Moody Blues lead singer, Justin Hayward’s “Spirit’s of the Western Sky” tour in 2013 , which wase released as a DVD.

Hewitt’s list of record production credits as both a producer and recording artist spans across the various major labels and genres. A first call composer for a long list of major film and television productions, Hewitt’s credits include National Lampoon’s Van Wilder, Bridget Jones: The Edge of Reason, Survivor, MTV, Dancing With The Stars, and is a favored composer for the Oprah Winfrey (including Oprah’s Big Give & Dr Oz).

The list of accolades from the industry includes The Golden Planet, New York International Film Fest Award, ESPY Award and 2 triple platinum albums, Warrant’s Cherry Pie and Earth,Wind & Fire’s Best Of Vol 1.
He has scored the music for Sony/Lionsgate TV series “Tom Holland’s Twisted Tales” which is currently airing with a second season coming up.

CHECK OUT ALAN’S “KEYBOARD MAGAZINE” INTERVIEW
FROM THE 2016 NAMM: