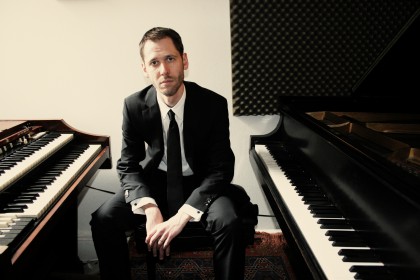 Alex Smith, a pianist, organist, composer, and arranger, has performed with a diverse array of musicians from jazz greats Tony Bennett, Louie Bellson, Buddy DeFranco, Carl Allen, Lynn Seaton, Slide Hampton, Maria Schneider, Jerry Weldon and Randy Johnston to stars such as Lady Gaga, Megan Hilty (from the NBC show “Smash”) and Max Weinberg, the drummer of Bruce Springsteen’s E-Street Band. He is currently the pianist and organist for Lady Gaga’s jazz quintet and will be featured on her  upcoming album with Tony Bennett “Cheek to Cheek” (out September 23rd, 2014) and on their PBS Special “Cheek to Cheek – Live!” which will air on October 24th, 2014.

Since moving to New York City in 2001, Alex has become, both as a leader and a sideman, a musician much in demand for a variety of groups. He leads a piano trio and an organ quartet, OH-JA, with a focus on original compositions and arrangements. From 2002-2009, Alex toured the United States and abroad as the pianist for the Tommy Dorsey Orchestra, conducted by the Big Band legend Buddy Morrow, and in 2009 was a featured soloist at Symphony Space in New York City with the Kevin Blanq Big Band in a centennial concert honoring the music of Claude Thornhill. In November of 2011, he accompanied Lady Gaga on her Thanksgiving Special for ABC. As pianist, music director, and arranger, Alex performs regularly with Brian Newman in clubs throughout New York such as the Oak Room at the Plaza Hotel, Duane Park, The Darby and the Gramercy Park Hotel.

Alex’s love of music began early. At the age of five, he began studying piano and by sixteen he was working with Phil DeGreg, the professor of jazz piano at the University of Cincinnati College-Conservatory of Music. Alex soon became a mainstay of the Cincinnati jazz scene, gaining valuable lessons by working with local legends such as John Von Ohlen, Bob Bodley, Art Gore, and Mike Wade. He also traveled to Taiwan, Singapore and Diego Garcia as the accompanist for the magnificent vocalist, Mandy Gaines.

While in New York, Alex co-founded the group Confluence, along with Jon Irabagon (2008 winner of the Thelonious Monk Competition), Mark Anderson, and Andrew Bain, to explore original writing and develop a group sound that is both cohesive and unique. In 2004, Confluence released its first album on the For The Artist recording label. Alex Smith holds a Bachelor of Music from the University of Cincinnati College- Conservatory of Music and a Masters Degree in Jazz Studies from SUNY Purchase. Alex has also studied with jazz masters Fred Hersch, John Abercrombie, David Hazeltine, Jon Faddis and Todd Coolman.