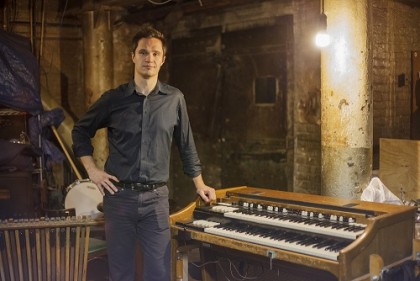 Ben Plays the B-3

A native of Philadelphia, Ben Paterson spent his younger years studying both classical and jazz music before moving to the great city of Chicago. There he spent years performing and working with the best musicians in town, absorbing the unique blend of Jazz and Blues that can only be found in the Windy City. Now, recently relocated to New York, Ben is poised to bring his unique talents and style to a wider audience, combining hard-swinging grooves, melodic improvisation, and a healthy dose of blues.

His own organ group, the Ben Paterson Organ Quartet (BPOQ) includes some seriously high powered Chicago jazz talent, featuring George Fludas on drums, Kyle Asche on guitar, and Victor Garcia on trumpet. The group blends hard swinging jazz chops with blues and funk influences, creating a sound that is hard not to like, and impossible to ignore.

A recent weekend headline performance at Chicago’s famous Green Mill jazz club inspired this quote from Chicago Tribune jazz critic Howard Reich:  “…a richly satisfying show, with three rising young artists and one veteran traveling freely among jazz, blues, funk and other sounds. An easygoing joyousness defined all this music-making, and though the audience roared its approval, no one seemed to be having more fun than the players themselves.”

“As soulful an electric pianist-organist as exists anywhere.”
–Downbeat Magazine