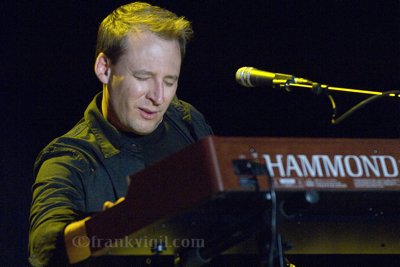 Full time keyboardist since 2008 with blues legend and former John Mayall and the Bluesbreakers guitarist Coco Montoya, Brant Leeper is a 19 year veteran of the national and international blues music scene.

Self taught, Brant’s childhood home was filled with the sound of 1950’s Rock N’ Roll, soul and blues. At the age of twelve, with a tape deck on the piano, Brant developed his ear and learned the mechanics of music through listening. In his early twenties, Brant relocated to Austin, TX where he honed his chops, playing legendary Texas music venues and roadhouses like the legendary Antone’s, The Saxon Pub and Gruene Hall.

As a songwriter, Brant wrote and performed on the tunes “Somethings Gonna Come My Way” and “Better Man” on Hamilton Loomis’ Blind Pig release Kickin’ It.

From early on, the Hammond sound has been a fundamental part of Brant’s music.

“I was the only kid in my school with a Hammond organ in my dorm room.”

When Brant hit the road in 1996, he was faced with the same problem most Hammond players face: how to get the Hammond sound with limited transportation and stage real-estate. “It’s tough traveling and doing one-nighters loading a 300lb B3 in and out… up and down stairs. My first portable Hammond was the XB-2 paired with a Leslie cabinet. That rig was my bread and butter for a long time. Then when the XK-3 came out, I was in heaven!”

“The best portable Hammond sound I have encountered was on a recent European tour with a back-line Hammond SK-2 paired up with a Leslie 3300 cabinet! The folks at Hammond have really come a long way in nailing the nuance, expression and tone of the original B3 in the SK series organs.”