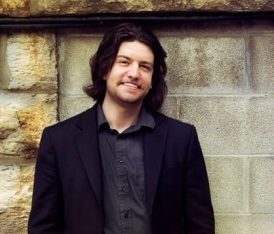 Dan Chase is a jazz pianist and organist currently based in Chicago. He began performing professionally at the age of 16 with various jazz and blues bands.  He is a member of the jazz-infused rock/funk band The Humble Organisms, who base their sound around the powerful Hammond B-3 organ.

Growing up as a classically trained pianist, Dan took a growing interest in jazz as a teenager.  He developed his skills primarily from listening and playing with other musicians, as well as working with professional jazz pianists.  He later was introduced to the sounds of organists Jimmy Smith, Larry Young, and Jimmy Mcgriff.

Dan has performed in numerous clubs in Chicago including Andy’s, The Jazz Showcase, Reggie’s, and The Green Mill to name a few.  He has expanded his skills outside of the jazz world in the group The Humble Organisms, blurring the lines between jazz and rock.  The group produces original music as well as putting their own spin on classic rock and modern pop.  The result is a powerful and unique modern organ quartet.

Upon hearing the sound of the SK2, Dan immediately decided to make it his primary gigging keyboard.  “The sound and feel of the Hammond SK2 is the closest you can get to the real thing.  I love the layout of the controls-great for customizing your sound on the spot.  Having extra voices built in saves me the extra effort(not to mention the weight!) of bringing multiple keyboards to a gig.  It’s exactly what I’ve been looking for in a keyboard.”