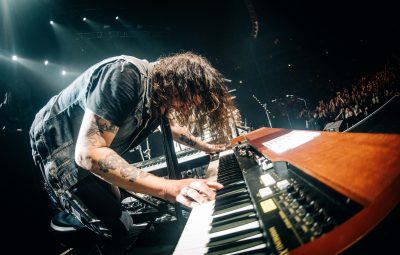 Rock And Roll Hall Of Fame

“Nothing can set the mood or bring out the intended emotion of a song like the B-3.”

In the world of music, Guns n’ Roses need no introduction. Few bands in history have achieved the level of success and recognition as G n’ R. The addition of keyboardist Dizzy Reed in 1990 marked a stylistic turning point in the band’s maturity, incorporating piano, and the epic tones of the Hammond B-3 into their aggressive hard rock sound.

Born in Hinsdale, Illinois and raised in Colorado, Dizzy started his musical journey in early childhood. His grandmother, who lived in the apartment above, played the organ, and taught Dizzy on her Lowry. Growing up, Dizzy was exposed to his father’s love of Booker T and the MGs. Once young Dizzy realized that was the same instrument he could play, he was hooked. By the age of 12 he was touring with his own band. Other early influences were Jon Lord, Gregg Rolie, and Grand Funk Railroad.

In 1985, Dizzy moved to Los Angeles, where a wild, rich musical scene was hitting its stride. “It was the place to be. There were thousands of bands from all over the world, trying to be the next big thing. There was an incredible amount of energy and it was magic.” While rehearsing and living in a Hollywood practice room, Dizzy befriended Axl Rose, and in 1990 he joined Guns n’ Roses on keys and backing vocals for the recording of Use Your Illusion I & II.

Making the transition from club rocker to a member of the biggest stadium band in the world required the majesty of the Hammond B-3, which Dizzy employed on the classic tracks “Dust n’ Bones”, “Yesterdays” “14 Years”, and “Don’t Damn Me”. Since 1991, Dizzy and Hammond have been onstage for every G n’ R show since, including the current Not In ThisLifetime tour, one the biggest tours in history.

“When all else fails, the Hammond is my inspiration. With G n’ R, I play an XK-5 through a Leslie 3300. It sounds unbelievable and I use it as a MIDI controller. I also play and XK-3 through a Leslie Studio 12 for clubs. It kicks ass, holds it’s own. And of course, in the studio, there is nothing like the B-3 through a Leslie. It’s the best sound ever.”

In 2012, Dizzy was inducted into the Rock n’ Roll Hall of Fame as a member of Guns n’ Roses. He has toured with the Psychedelic Furs and has toured, recorded and written with supergroup The Dead Daisies who’s lineup has featured members of The Cult, Motley Crüe, White Snake, The Rolling Stones and Thin Lizzy. Their modern but classic sound is a perfect fit for the B-3.

He also sings lead vocals with his side project, Hookers and Blow. Dizzy is a father of four, and lives with his New Zealand-born wife, Nadja, in Los Angeles. On surviving and flourishing in rock’s sharky waters, he says, “Never stop learning and exploring, but don’t forget what you do
best. Stick to your guns.”