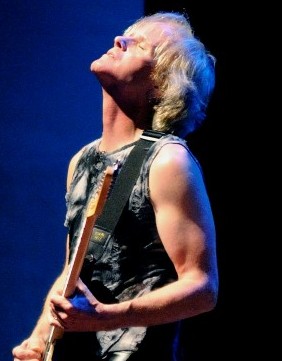 ‘when there’s magic in the music’

Guitar was and will always be Frankie’s first love.

“I was about 13 years old when I began seriously listening to music—and that happened to be the era of great guitar music: Cream, Led Zepplin, Jimi Hendrix, the Beatles’ John Lennon. Just about every group had great guitar players. Listening to these guys, I was primed.

“I later realized that these great guitar players took everything they did from an earlier generation of great blues guitar players. Those bluesmen were incredible. And only recently have they received any recognition from people like Eric Clapton and the Stones.”

Inspired by these artists, Frankie picked up a guitar at age 15 and never looked back.

‘i’ll never know what brought me here,
as if somebody led my hand,
it seems I hardly had to steer,
my course was planned.’

That plan for Chicago-born Frankie Sullivan began with his first band, Mariah. He played second lead guitar for the band that impressed Billboard: “It’ll blow you out of your chair. Mariah delivers a hot, searing rock and roll that is the most exciting single to emerge from UA in years.”

Mariah led Frankie to Survivor. In 1977, a former classmate who was working as Jim Peterik’s soundman encouraged Frankie to come over and jam with his boss—a jam session that led Peterik and Sullivan to form Survivor. The original lineup consisted of Frankie and Jim Peterik—plus Dave Bickler, Dennis Johnson and Gary Smith. Besides being Survivor’s main guitarist, Frankie has co-written almost all of the band’s material with keyboardist/guitarist Jim Peterik.

By the end of 1978, Survivor signed a record deal with Scotti Bros. Records. Under the patronage of John Kolodner, then head of A&R for Atlantic Records, Survivor went into the studio to cut its debut album, Survivor (1980).

‘so many times, it happens too fast,
you trade your passion for glory.’

The band added Marc Droubay (drums) and Stephen Ellis (bass) for their second album. Many fans consider the 1981 Premonition—with singles “Poor Man’s Son” and “Summer Nights”—their favorite Survivor record. This record improved on the first album’s success; the band’s big breakout came with the 1982 release of Eye of the Tiger.

The title song for this record—written for the opening scenes of the film, Rocky—brought the band national attention. “Eye of the Tiger” spent seven weeks at the #1 spot on the U.S. charts and was #1 in twenty-four countries. The song won a Grammy and Oscar nomination and a Golden Globe nomination for Frankie and Jim Peterik. It won the People’s Choice Awards that year as well as receiving a Grammy Nomination for “Song of the Year.”

A String of Hits

1983 found Survivor back in the studio at work on Caught in the Game. Release of this title track continued the band’s successful string of hit singles.

During the summer of 1984, the band was faced with the chore of replacing lead singers. The tour scheduling had a negative effect on Dave Bickler; after minor throat surgery, Dave left the band. They auditioned a guy by the name of Jim Jamison first. Frankie wanted him that day but other members of the band still wanted to check out a few more singers.

“After we tried out another singer for three days, it hit me. Let’s get Jamison up here and in the band and make a record, like now. I called Ron Nevison to do the producing job. He had never heard the new singer! But I asked Ron to trust me and sent him a tape of “Broken Promises,” a new song the band had learned at rehearsals. After getting Ron’s vibe, it was a closed deal.”

Survivor’s fifth album, Vital Signs, was a monster comeback record that achieved multi-platinum status. Its hit single, “Can’t Hold Back,” reached the top ten pop charts and made #1 on the album rock charts. This was followed by “High on You,” another top-ten hit, and “The Search is Over,” which reached #2 on the hot 100.

Despite a hectic U.S. and world tour, the band recorded Burning Heart, the title track for Rocky 4. The song went all the way to #2 on the hot 100 charts, propelling the sound track album to multi-platinum status. It was 1987 before Survivor had time to stop and make another record, when Seconds Count delivered another top-ten single, “Is This Love.”

In 1986 Frankie made a guest appearance on Heart’s Surprises of the Heart album, playing solo guitar on “Nobody’s Home” and additional guitar on “Nothin’ at All.”

In 1988 Survivor released its seventh album, Too Hot to Sleep—considered by many critics and fans alike to be one of Survivor’s best.

In 2007 Frankie had the good fortune of re-teaming with Robin McAuley.  Frankie produced a record for Robin in … and Frankie knew that Robin would be a great front man for Survivor.   Robin’s powerhouse vocals and great stage presence made him a natural fit with Frankie’s guitar riffs.  Robin joined Survivor and the live shows became dynamic.

2010 also found Frankie following his passion of playing the blues.  Frankie has been playing the blues clubs in the Chicago area and is having the time of his life.  Could there be a blues album in his future…with Frankie you never know what inspiration will spark.

In 2012 Jim Jamison re-joined Survivor and gave the fans what they wanted.

‘the search has come full circle’

Frankie Sullivan considers himself fortunate enough to have been part of some really good things: an Oscar nomination, a Golden Globe Nomination, two Grammies, a People’s Choice Award, a six-time member of the Million-AIRs Club—for artists who have had songs played on the radio at least one million times—and eleven top-ten records. Plus, “Eye of the Tiger” ranks number 18 on the Billboard top 100 songs of all time.  Digital downloads

But ask Frankie Sullivan the high points of his career and you won’t hear any of these accolades. Instead, you’ll get an answer as sharp and clear as one of his guitar riffs: “I haven’t had them yet.”