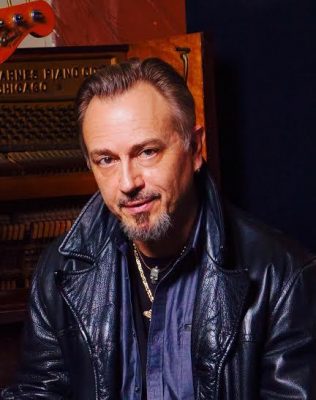 Jimmie Bones is most widely known as the blues and soul influenced rock and roller at the piano, organ, harmonica, and backing vocals with Kid Rock and the Twisted Brown Trucker Band. Bones broke away from a few years of formal keyboard training which began at age ten and immersed himself in the music that spoke to him. His classroom was anywhere that had a piano and a record player and his professors were Ray Charles, The Rolling Stones, Jerry Lee Lewis, Little Richard, Otis Spann, Big Maceo Merriweather, Johnnie Johnson, Billy Preston, Booker T. Jones, Earl Van Dyke, Nicky Hopkins, Ian Stewart, Ian McLagan, and so many others who graced the early Blues, R & B Soul, and Rock and Roll records that Jimmie was and is still addicted to.
Jimmie Bones was born James Trombly in Detroit, Michigan at a time when both the automobile and the music industries were thriving there. If you didn’t work directly for the “Big Three” building cars you worked in one of the companies that supplied them to keep the assembly lines rolling out cars that defined the “Motor City” and also gave a name to a record label called MOTOWN that would impact pop music forever and leave a profound impact on the heart, soul and ears of a young kid who would later become known as Jimmie Bones. The radio was always playing and Jimmie was not only hearing the R & B Soul of the time but also the sounds that the world was falling in love with coming from the “British Invasion” lead by The Beatles and The Rolling Stones. Bones was drawn right in with everyone else which eventually lead to exploration of what those groups were influenced by which was Blues and early roots Rock and Roll.
By the time Jimmie got into high school, music had cast it’s spell and he began to get together with other young musicians forming bands and doing gigs at school dances and the local VFW teen dances. When there wasn’t a paying gig Bones and company were playing for groups of friends in garages and basements mostly until the police arrived to turn down the volume or in many cases shut down the party. In the best case scenarios the cops would hang out and listen for a bit as a break from their more serious work. Soon Bones began to gig in the Detroit club scene and found himself not only fronting his own band Jimmie Bones and the Graverobbers but also being called upon to record and do shows with many Detroit acts as a sideman keyboardist. This lead Bones into a stint as part of the backing band for an artist signed by RCA records named Robert Bradley. Bones tracked on the debut record and toured with Robert Bradley’s Blackwater Surprise.
It was during the sessions for the first Robert Bradley record that Jimmie met a young artist who was working on one of his own independent releases in the B room of that same studio. That young artist who went by the name of Kid Rock asked Jimmie to lay some piano tracks and soon do some live shows on keys as part of his band. In time Bones would eventually become Kid Rock’s full time keyboardist both recording and touring as a member of The Twisted Brown Trucker Band. Bones soon began contributing backing vocals and harmonica as well as co-writing credits with Kid Rock and Uncle Kracker. Jimmie’s co-wrotes include ‘Yeah Yeah Yeah’, ‘Better Days’, and ‘You Can’t Take Me’, from the multi platinum Uncle Kracker debut “Double Wide”. Bones also contributed heavily throughout Uncle Kracker’s “Double Wide” on keyboards and backing vocals notably the B-3, Wurlitzer, and backing vocals on the hit single “Follow Me”. Bones has taken his wood shed, street level education with him into a career that has found him onstage and in the studio with not only Kid Rock and Uncle Kracker but also Bob Seger, Peter Wolf, Sheryl Crow, Billy Gibbons, R. L. Burnside, Hank Williams Jr., Beth Hart, Mark Farner, Brad Whitford, Derek St. Holmes, Dick Wagner, Howling Diablos, Royal Blackbirds and many others.
As a singer/songwriter and recording artist Jimmie Bones has completed working his new solo record ‘Snakebit and Wandering’ set for a January 2017 release on Funky D Records. Produced by Martin ‘Tino’ Gross, ‘Snakebit and Wandering’ is a mix of Bones’ blues, soul, roots rock and roll influences poured into his gritty singing, playing, and songwriting. Tino Gross and Jimmie Bones are the pair who collaborated on the critically acclaimed R. L. Burnside release ‘A Bothered Mind’ on Fat Possum Records. In anticipation of the full length release the title track/single ‘Snakebit and Wandering’ and it’s B side ‘Honey Flow’ are now available on iTunes, Amazon, Spotify and more.