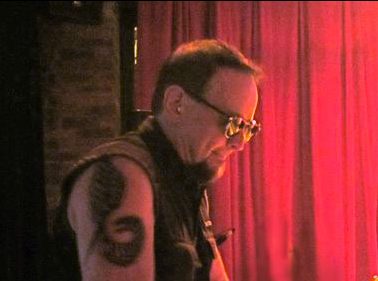 John W.F.Goode’s Grandmother and first musical influence was Helga Lind. A university music degree in 1922 saw her advance to perform, teach & provided live piano accompaniment to silent films in the 20’s before sound “talkies. It was HER astonishing abilities as concert pianist that inspired John as a very young boy. John was showing clear signs of music ability at a very early age. As well as enrolling him in a pre-school for musically gifted children, she frequently took him to hear concerts at the Seattle Symphony and also Victor Borge which were absolutely thrilling. She provided him encouragement and guidance in writing original classical pieces for piano & orchestra which was his first exposure to music.
Favorite composers of John’s are Rachmaninov, Brams, Bach, Kabalevsky, Mozart, Remeau to name a few, all of which he studied in earnest in his early years. The discovery of guitar at the age of eight brought formal study in addition to piano. Later, when blues and boogie-woogie were discovered, both the piano, Hammond Organ and guitar were taken to a whole new level. Artists like Jimi Hendrix, Jeff Back and the fabulous keyboards and arrangements of Emerson Lake and Palmer, along with John’s father’s record collection which included the jazz organ works of Jimmy Smith, Brian Auger, Jack McDuff also provided major keyboard influences.
John also thrived on Europe’s “progressive rock” groups who’s technical musicianship, sophisticated compositions and instrumentation of groups like Gentle Giant, Kraan and many others served to further John’s creative influences. Thankfully John possessed the dexterity to faithfully perform these artist’s material and by that time even more fortunate to have been in the company of drummer Todd Kasper and Bassist Keith Lowe who were equally able to perform these feats along with him while concentrating on stretching the boundaries of original compositions. Movie scores by John Williams, Jerry Goldsmith, Alexander Courage, the classic B horror and sci-fi of the 1950’s and 60’s, and many others were also huge influences at that time, and continue to be so.

John’s first live group was born out of the basement of his parents suburban house in the 1970’s, called MIND. The band performed beautiful covers of the Allman Brothers, Stones, Hendrix, and many more plus the above mentioned ELP, along with earlier Emerson material from “The Nice”. MIND was eclectic, as it was extremely rare to hear young teenagers performing such complex pieces with complete control and ease. The group went on to become extremely popular and performed regularly at many official and non-official functions over the next few years. Two different Hammond C-3’s and Leslie amplifiers were employed during this time. 2014 saw the first reunion of MIND in 34 years. Another in August 2016 is being prepared.

Anarchy Express: with bassist Keith Low and drummer Todd Kasper making the transition with John out of the group Mind in the early 80’s. As a power trio Anarchy played progressive, avant-garde jazz, jazz-rock, with heavy emphasis on original music in the flavor of Hendrix, Jeff Beck & Frank Marino. as well as exploring the keyboard musings of Keith Emerson like pieces. Always writing, always pushing the envelope technically & physically with original compositions, Anarchy Express morphed into a hard working road-house gigging blues & rock type group in the following years with the addition of lyricist/vocalist Tapeni Suianoa, as well as collaboration with bassist Bobby Gene Riddle that produced some outstanding originals and CDs throughout the 80’s and 90’s.

These years saw hundreds of hours spent in the studio composing and recording original material for albums and sound tracks–the more complicated, clever & ingenious the arrangements & instrumental movements, the better. As an on-staff composer at a major Seattle recording studio, too many jingles, radio ads and general video sweetening projects were scored to keep count. Most of these recordings were in the day of huge 2 inch 24 track analog tape. Sync to picture was obtained via fisk tone linked to a big tube TV monitor with time code. Delivery was achieved by mixing to stereo two-track on 1/4 inch tape. How times have changed!

Later on Cobalt Hook formed as a progressive blues band in the mid 90’s, using traditional blues formats in unusual arrangements that continued John’s trend for exceptional original material. Cobalt Hook was a very hard working group, with many years of four-night-a-week schedules in and out of clubs and private shows.

In 2010 John was composer for “The Twisted Whiskers Show” an animated television series of 104 episodes that was distributed world-wide and still see’s syndicated re runs to this day. Full use of orchestra was employed but the Hammond Organ was also used extensively throughout including a featured piece on the closing credits.
John was also composing and performing in the studio for Tom and Jerry The Fast and The Furry feature cartoon. as well as dozens of TV, radio ads and other funny cartoons shows. Currently John has several shows in development he is composing for.

“Tonewheel Triggerfingers” is the most recent CD release of all original material – “Keyboard based, “Hammond Organ Lovers” Proggressive Rock, a little Blues, Jazz and more….. “(TONEWHEEL: a multi edged disc contained in a larger mechanical assembly of 96 total, responsible for generating the electronic musical notes used in Hammond organs). A follow up album to Tonewheel Triggerfingers is nearly complete.

In live performance currently John provides Hammond Organ and keyboards for “The Smokin Js” The Northwest’s Premier Allman Brothers band that also covers a substantial playlist of classics & favorites. The Smokin J’s are very busy with live commitments but look for an all original album in the near future.
John also provides keyboards/Hammond for “The Brown Baggers” and is frequently sought after for studio guest spots throughout the region by well known artists.

John says, “It is my mission to continue bringing the Hammond Organ & keyboards in general out of the shadows at the back of stage, to up front right along with the guitars where the audience can see & experience how exciting it can be. Too long it has been some person sitting behind a “desk” back there. I use it as an integral & vital front lead instrument with all the flash & fireworks of any guitar.”
John also delights in repairing, modifying and rebuilding vintage Hammond organs and Leslies and has owned many over the last 40 years. His favorite is his completely restored inside and out 1958 C3 affectionately known as “Spewey” which is featured on “Tonewheel Triggerfingers” and many more.