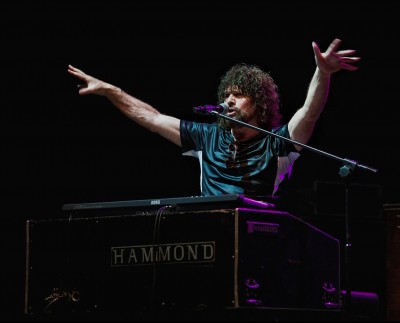 Mark Stein is the lead vocalist, keyboardist of “Vanilla Fudge”. Mark first founded the Vanilla Fudge in 1966 at the age of 18, with members Tim Bogert, Vinny Martell, and Carmine Appice. In the short time they were together the band enjoyed their first giant success with their first Atco release self titled “Vanilla Fudge”.

This was a ground breaking album since it was the first album to reach top ten on Billboard’s charts without a hit single. The legendary rock arrangement of “You Keep Me Hangin’ On” became their first hit single some two years after the release of the first album.

During the late 60’s the Fudge were one of rock’s most exciting high energy touring bands, setting the stage for the likes of Jimmy Hendrix, Deep Purple, and even Led Zeppelin. These legendary rockers spread their musical and performing influences throughout the world, and it has been quoted in print by many of today’s classic rock stars such as Led Zeppelin, Yes, Deep Purple, and others that Vanilla Fudge had a profound effect during the musical renaissance of the late 60’s, that carried through to the present.

In classic rock circles, Vanilla Fudge is identified by Stein’s Hammond B-3 organ sound that helped bring the instrument into a prominent place in progressive rock. As a teen, Mark was influenced by Jimmy Smith when it came to jazz and funk, and Felix Cavaliere when it came to rock and soul. His dynamic style was an influence on a host of players early on from Deep Purple, Jon Lord (RIP) to even Paul Schaffer of the Dave Letterman show.

After the Fudge parted ways in the early 70s, Mark took a hiatus from the “Rock Wars” and decided to develop his writing and playing skills further. After flirting with a solo career, where he had a single released in England on the Phil Spector International label he resurfaced with the Tommy Bolin Band in the mid 70’s. This was a highly regarded group that had the likes of Narada Michael Walden on drums, Reggie McBride on bass, Norma Jean Bell on sax, and Mark on keyboards and sharing the vocals with Tommy. This was a high energy rock/fusion influenced band that attracted people like John McLaughlin, Jan Hammer, and Jeff Beck to name a few to come see the band live. It was during that time that Mark had added muti-synthesizers to his already distinctive B-3 organ sound. Mark toured and recorded with Bolin (“Private Eyes”) album. Mark left the Bolin band just prior to Bolin’s death, Tommy was 25 years old.

After working on several writing projects, Mark joined Alice Cooper on the “Welcome to My Nightmare” show and toured Australia and New Zealand. Upon his return to the states he hooked up with Dave Mason who produced Mark’s solo album on CBS Records in 79′. Mason then asked Mark to join forces with him and Mark toured and recorded with David for the better part of four years. Mark penned five tunes on Mason’s “Old Crest on a New Wave” album, which also had a guest vocal appearance on “Save Me” by Michael Jackson.

In 1983 Mark re-signed with Atlantic Records to do a Vanilla Fudge reunion album entitled “Mystery”. In 1987 the Fudge did a three month U.S. tour, and recorded a “live” album during some of those dates. “The Real Deal”, this is the only Vanilla Fudge live album with all the original members. The band appeared live at Atlantic 40th Anniversary show in May of 1988 at Madison Square Garden.

Vanilla Fudge reunited once again in 2005 and toured North America with the Doors of The 21st Century. The following year they went on to record “Out Through The In Door” a tribute album to their old friends Led Zeppelin which garnered critical acclaim. In 2007 they were inducted by Felix Cavaliere into the Long Island Hall of Fame along with Billy Joel, Joan Jett, Twisted Sister and many other greats. Soon after they appeared on Late Night TV show with Jimmy Fallon during yet another reunion tour,

With the new Vanilla Fudge release of Spirit of 67’ on Cleopatra Records, Mark will be touring and promoting the new album and Rockin’ into 2015 and beyond.