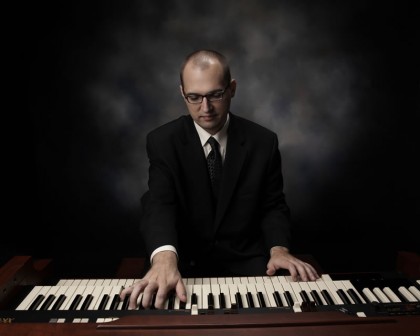 Matthew is the Organist for the Atlanta Braves

Born in Chicago, IL, Matthew Kaminski has been playing the Hammond Organ since he was five years old. Studying under Chicago jazz pianist Gordon James in his teens, Matthew was accepted into the University of Arizona’s jazz studies department as a jazz pianist. There, he studied jazz with Dr. Jeffrey Haskell and Mike Eckroth, and played in the jazz ensemble and combos as well as studying classical piano with Dr. Suzanne Knosp. Matthew also attended master classes by Wynton Marsalis and Kitty Margolis, and performed with vibraphonists/marimba musicians Dave Samuels and Dave Friedman.

In January of 2008, Matthew returned to G.S.U. to pursue a Master of Music degree, studying jazz piano with Kevin Bales. That April, the Georgia State Jazz Ensemble with Matthew on the piano, performed with jazz legend Jimmy Heath. In November of 2008, Matthew, continuing his education, attended a master class by trumpeter/arranger Michael Mossman, and in April of 2009, Matthew performed with jazz trumpeter Jon Faddis. In the fall of 2009, Matthew attended master classes by bassist Eddie Gomez and saxophonist Bob Reynolds. He also had the fortune of recieving a private lesson with organist Scott Giddens. Matthew graduated with a Masters of Music degree from Georgia State University in December of 2011.

Matthew has a passion for jazz organ playing and has studied with Hammond B3 masters Ike Stubblefield, Tony Monaco, and Scott Giddens, as well a sharing the stage with fellow organists Pat Bianchi, Linda Dachtyl, Wil Blades, Todd Hildreth and guitarist Grant Green Jr. Additionally, Matthew has been a full time piano teacher since 2001 and currently teaches at The Peggy Still School of Music Alpharetta and Atlanta locations, and has taught at the college level for Georgia Tech in Atlanta, GA. Matthew continues to perform regularly in the Atlanta, GA metro area on three instruments: the Hammond organ, piano, and accordion.

In February of 2010, Matthew’s debut CD “Taking My Time” on Chicken Coup Records (Summit Records) is released featuring Matthew on the Hammond B3 Organ. Matthew is an Endorsee of the Hammond/Suzuki Organ Company and proudly performs on the Hammond XK System Organ and Hammond SK1 stage keyboard, which is amplified by the Leslie 21 System Speaker.