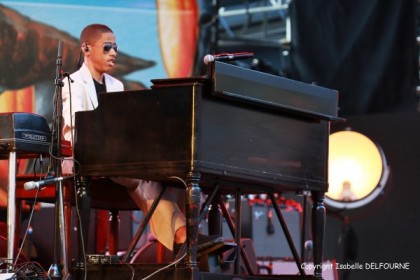 Matthew Whitaker, a resident of Hackensack NJ, is truly a gifted musician.  His desire to play music began at 3 years old when his grandfather gave him a small Yamaha keyboard. After banging on it a few times we noticed Matt was playing “Twinkle Twinkle Little Star” without anyone showing him how to do it.  Born, April 3, 2001, 3 months premature at 1 pound 11 ounces and blind, Matthew is the youngest child of Moses & May Whitaker.

Matthew’s love for music with its different harmonies and melodies, especially jazz, gave birth to his true love the Hammond B3 organ.  At 9 years old Matthew began to teach himself how to play the B3.

He has performed before the UN Youth Assembly at the United Nations Headquarters in New York City, Lincoln Center, Jazz at Lincoln Center and internationally in Capri Italy, Tetouan Morocco, Vienne France, Tokyo and Osaka, Japan.  Matthew has been recognized by various organizations and has appeared on US and Japanese television.

Matthew was a winning participant in the “Amateur Night at the Apollo Child Stars of Tomorrow” performing on the Hammond XK3-C. The Hammond B3 was the instrument of choice when Matthew was the opening performer at the Apollo Theater’s Spring Gala 2011 where Stevie Wonder was inducted into the Apollo Legends Hall of Fame and as a guest performer at the 20th Annual Jazz Loft Party Fundraiser and A Great Night In Harlem After Party hosted by the Jazz Foundation of America. Matthew has performed with Roy Ayers, James Carter, Jon Batiste, D.D, Jackson, Christian McBride; Jazz Mafia Symphony; with Ozomatli and ‘The New York Pops’ Orchestra; and with Hamiet Bluiett and his Bio-Electric Ensemble.  He can also be found playing the drums during worship service on 3rd Sundays for the Youth Choir at New Hope Baptist Church of Hackensack, New Jersey, his home church.