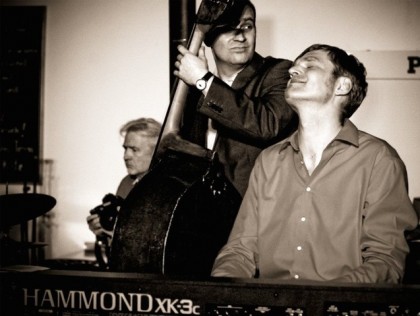 Versatility and flexibility. If you want to characterise Daniel Mark Eberhard’s strong points these two words are probably the most appropriate. He has the ability switch effortlessly between jazz, pop, classical music, crossover, traditional and world music, and is an accomplished musician on the piano and keyboard as well as on the accordeon. Above all, Daniel Mark Eberhard is a passionate player of Hammond XK-3c, SK1 and the Melodion. In Germany, you will probably find only a handful of artists who have these talents, and who – on top of all – work as professor for musical education.

Daniel Mark Eberhard grew up in the south of Germany. There, he made his first musical experiences on melodika and accordeon with traditional music styles. Soon, however, he became more and more fascinated by the piano and started to play Boogie Woogie and Blues. His musical spectrum became enhanced through university where he studied music and mathematics. Additional impulses came through the „Bavarian First Herd“, a big band for up-and-coming musical talents, and several jazz and pop bands he played with.

In 2000,  he had the chance to cooperate with Jaques Loussier’s world famous trio. This encounter inspired him to go down a new artistic road: the arrangement of classical music for jazz ensemble – from works of Bach to the complete von-Weber-opera „Der Freischütz“.

Besides his work as award-winning musician alongside artists like Bobby Shew, Sheila Jordan, Chico Freeman, Claus Reichstaller, Sebastian Studinitzky and many others, Daniel Mark Eberhard passes his know-how and experience in jazz and pop matters on to his students at „The Berlin University of the arts“ and the University of Augsburg . Additionally, he gives workshops for different target groups – from school teachers to the young musicians of the Bavarian Youth Jazz Orchestra.

In various radio and TV productions, he has taken part as arranger and musical director. In 2008 he initiated the degree course  „Jazz / Pop / New Media“ at the University of Augsburg.