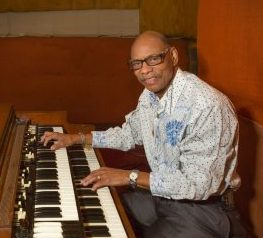 Recording and Touring Artist
Rev. Hodges Plays the B-3

Not many organists can say they performed and wrote songs with legendary award-winning artists Al Green, Willie Mitchell, and O.V. Wright. However, Reverend Charles Edward Hodges can say that and much more. He has been heralded as one of the premier musicians who helped to create the sound of Soul Music that originated from Memphis, TN in the 60’s and 70’s.

Listening to Rev Hodges play his beloved Hammond B-3 organ is a spiritual experience. His fingers glide swiftly along the keys stirring up whatever emotion he seeks to display, while revealing the majesty of an instrument many have abandoned for other more popular devices. Some may call it anointed, others phenomenal but none can deny that he is gifted. Even Grammy-Award winning artist John Mayer recognizes it. Although Mayer wasn’t even born when he first gained popularity, he requested Rev Hodges presence as a guest before he performed at a concert in Memphis and blogged about the experience later. “Legendary organist Rev Charles Hodges stopped by Fed Ex Forum in Memphis to check out my show and sat down at the Hammond B-3 during sound check to put a massive smile on everyone’s faces by playing some of his most famous keyboard parts, namely Al Green’s Love & Happiness, what a complete thrill,” wrote Mayer.

Rev Hodges talents have been recognized worldwide, but it all began as a youth in his hometown of Germantown, TN. Charles Edward Hodges was born on June 29, 1947 in Germantown, TN. to LeRoy and Rosie Lee Hodges. The seventh of 12 children, including three sets of twins. Rev Hodges and his twin brother, Carl, made up the third set. At the age of 11, he discovered his love for the piano and under the direction of his musician father he learned to play by ear. He later embraced the organ and joined his father’s band, the Germantown Blue Dots along with his older brothers LeRoy (bass) and the late Mabon, affectionately known as Teenie (guitar).

At the age of 16, he became a local celebrity overnight after being invited on stage to perform with popular Blues/Soul artist O.V. Wright when his regular organist neglected to show up for a performance. Wright was so impressed by his musicianship he invited the youth to perform with him after he graduated from high school. He didn’t think Wright was serious, but later realized that Wright meant what he said and starting touring with him throughout the United States at the age of 18.

Due to health issues, Rev Hodges retuned home and joined his older brothers in Willie Mitchell’s Band. After Willie Mitchell dissolved his band. The former band was born as Hi Rhythm and continued as the House Band for Hi/ Royal Studios in Memphis, TN. The members of the band are: Rev Charles Hodges, LeRoy Hodges, the late Mabon “Tennie” Hodges , Howard Grimes and Archie” Hubbie” Turner. The band’s distinctive, warm, swirling soul sound and intutive groove/funk was a major ingredient in the success of the Hi Label through the 1970’s. By the mid-1970s, the band had performed on 26 gold and platinum albums and countless chart-topping hits for Willie Mitchell, Al Green, Ann Peebles, O. V. Wright, Syl Johnson, Otis Clay, and many others. The band was later joined by Fred Hodges (keyboards).

In 1998, Rev Hodges answered his call to preach and now serves as Associate Minister and Organist at New Bethel MB Church in Germantown, TN. He had spent much of his career helping others develop stellar music. In 2006, as Rev C.E. Hodges on the Velvet Label, he released his first solo album entitled “Take It to the Altar” and in 2011 he released his Sophmore Album, “God He’s Able”.

Rev Hodges professional music career spans over 50 years and his achievements in music have been recognized with many awards. He received accolades from two Tennessee Governors, two Memphis, TN Mayors and two Shelby County Mayors. He was also given a Key to the City of Memphis and a Key to Shelby County. He received recognition from the Tennessee House of Representatives and by the City of Memphis’s City Council. He is a recipient of the W.C. Handy Award from the Blues Foundation and was inducted into the Memphis Music Hall Of Fame in 2016 as a member of Hi Rhythm. There is also a Brass Note bearing his name on “Beale Street Walk of Fame” in Memphis.

He is very humble when speaking about his various accomplishments and when asked for the specific names of several of the songs he played on he sheepishly admits that after becoming saved he stop keeping a detailed record of his secular music achievements. These days, what matters most for him is what he’s done for the Lord. His deep church roots are evident within his music and reminds the listener of the Gospel tunes often heard in country churches where if you couldn’t feel it in your spirit, it wasn’t being played and sung right.

“I’m still recording but when it comes to God’s work it’s what I live, eat and breathe. “God is willing and able but you have to believe it. If you believe in it, you can speak it and that mountain will be removed. God can do it for you if you let him.”