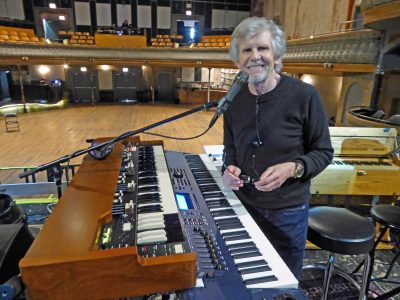 ROCK AND ROLL HALL OF FAME

In the ever-changing world of pop and rock, it’s an achievement to write and perform even one song that stays in the public consciousness. To do it again and again, and for those songs to keep on renewing themselves decade after decade while you continue to create new ones and perform all over the world, is rare indeed. But then singer, songwriter, master of the keyboards and recording artist Rod Argent is a rare talent.

While at St. Albans School, Rod Argent met Paul Atkinson and Hugh Grundy. The three joined with Colin Blunstone and Paul Arnold (who left soon after and was replaced by Chris White) to form The Zombies the second UK group following The Beatles to score a #1 hit in America.  In addition to playing piano and keyboards in the group, Argent was (with White) one of the group’s two main songwriters, penning the hits, “She’s Not There,” “Tell Her No,” and “Time of the Season,” among many others.

After the Zombies split, he went on to form Argent who had a hit album in 1972 with All Together Now, which contained the single “Hold Your Head Up”. HisHammond B3 solo on that track is cited by Rick Wakeman as the greatest organ solo ever. They also recorded  the original version of the rock anthem “God Gave Rock and Roll to You,” written by lead singer Russ Ballard, later covered by other artists, including Petra and KISS. Argent’s first album included “Liar” (also composed by Ballard), which became a hit for Three Dog Night.

In the 1970s, he was in constant demand as a contributor for countless albums, which ran the gamut from Andrew Lloyd Webber’s “Variations” and records with Barbara Thompson, John Dankworth and Cleo Laine, to Gary Moore, Roger Daltrey and The Who’s “Who Are You,” including playing piano on the much-loved title track.

Argent and Blunstone continue to tour worldwide as The Zombies. Their current album “Still Got That Hunger” brought the band back to the Billboard Album charts for the first time in 50 years. Reunited with Hugh Grundy and Chris White, Rod and Colin have been touring the World performing their classic album “Odessey And Oracle” in its entirety to sold-out crowds.

One critic noted, “the Zombies, still led by original keyboard wizard Rod Argent and featuring the smoked-silk vocals of Colin Blunstone, is the best 60s band still touring which doesn’t have Mick Jagger as a front man”.

In 2017. Rod Argent became the first Major Artist to tour with the Xk-5