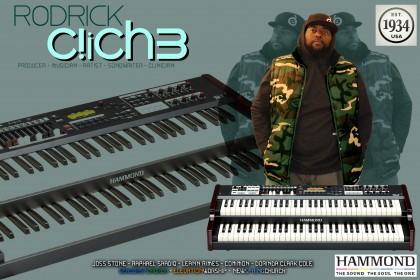 Cliche (born Rodrick Terrell Simmons on June 19, 1982 in Charleston, South Carolina) is  a singer, songwriter, producer, and musician that will definitely become a legend one day among the greats. To know Cliche, is to know a great Leader, Father, Friend, Mediator, Teacher, and simply a Humble Servant of Purpose.

The child of a very strict Christian home, Cliche began his musical voyage first on drums around the age of 6. Playing Gospel in church for years without the liberty to listen to secular music in the house. This altered his attitude towards his family’s lifestyle and beliefs. It was difficult to respect his parents rules because some of his favorite artist weren’t Gospel.

At a very young age, it was hard to understand how his natural desires began to exclude him from his families beliefs but he obtained balance in finding his individuality.

It was in 2006, when Cliche was finally introduce to the Popular music industry, found on the popular website myspace.com by one of his biggest influences, Raphael Saadiq! Saadiq had been a mentor to Cliche years before they had ever met, and from meeting him Saadiq beame a big brother to Cliche. Since then, He has had the opprtunity to perform on stage with Raphael Saadiq,  Leann Rimes, Common, Ryan Shaw, and Javier to name a few. In 2007, Cliche was on tour playing organ for World Renowned Soul Singer, Joss Stone. Throughout that year he was also in the studio with his Mentor, (Saadiq) recording and arranging together.

Through his music, Cliche aims to empower people to a more spiritual awareness and show the undeniable relation between music and magic. Through his influence, he aims to help unite the world of every race and religion to a common place of love. Through his life, he aims to detox oppressed mentalities through open channels of communication.