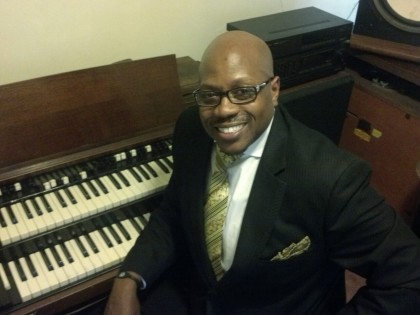 Steven plays the B-3

I was born on May 25, 1974 in Cleveland, OH.  I started playing the Hammond Organ during the summer of 1984, at the age of 10.  I was taught to play by my father, (Steven S. Golden, Sr.), who was the musician and Pastor of our church.  My father retired from being the musician and I later became the churches main musician by the age of 11.  For the next 7 years, through sweat and tears, I got a lot better and played at many musicals and church services.  I graduated from Shaw High School in East Cleveland, OH in 1992 and went to Central State University in Wilberforce, OH.  While I was in college, I played the Hammond Organ for various churches during school and on breaks from school.  I graduated from college in 1997, earning a BS in Business Administration.  In April of 1997, I joined Williams Chapel Church of God in Christ.  I was the Organist and Musical Director, then also became the Minister of Music.  I then married my college sweetheart of 5 years, (Tiffany D. Golden), in September of 1998.  We later had a son, (Steven S. Golden, III.), in June of 1999.

I’ve completed 2 solo musical projects. The 1st one in 2005, an instrumental with me playing hymns on the Hammond, titled, “Touching The ‘Hymn’ Of His Garment”.  The 2nd project in 2007 of me singing , also having background vocalist and myself playing all the instruments.  I have been playing the Hammond Organ for 29 years and I absolutely LOVE this instrument!  I’ve played the Hammond M-Series, A-100, A-102, B-2, B-3 (my favorite), C-3 and I currently own a C-V with a 122 Leslie connected.  I love this instrument so much that I even have a personalized license plate that says, “HMMND B3”.  Hammond Organs are the ONLY organs I use and are the BEST organs in the music business!