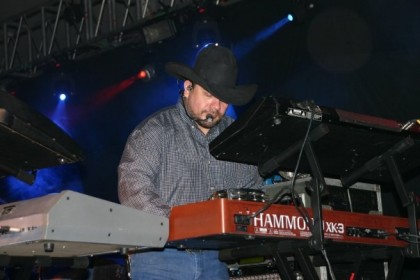 Tim first started seriously playing on piano and Hammond organs at the age of 13 years old,  when he would sneak into the auditorium of the High School next door to his home in Ottawa, IL. “Firing up that big organ and Leslie and listening to the tone wheels starting up was always fun….because I knew playing it was just moments away” He would practice for 8 hrs a day, trying to emulate the sounds and styles of Elton John, Billy Joel, Stevie Wonder, Dennis DeYoung, Steve Winwood, Billy Preston among many other influences.

From these early beginnings Tim traveled throughout the Mid-West and Canada working 6 nights a week 46 weeks a year in a traveling show band playing everything from `50`s music to whatever Top 40 music was popular at the time. “Covering classic organ songs like “Whiter Shade of Pale” and the like always made for a fun show” Tim has almost always carried around a Leslie even during the 1980`s when it was difficult to find a decent sounding “organ patch” from the synths that were around at the time,” If you could run it through a real Leslie, then you could almost make it sound believable”

Tim has been playing keyboards for former Giantslayer records Country Music Artist Dustin Evans for close to 19 years, and has included a portable Hammond organ and a vintage Leslie 860 in his multiple keyboard rig since 1996 starting with the XB-2 and now with an MK-3-c for the last several years…all the while running them through his trusty 860 Leslie. “She has hardly any paint left on her, and the wood has seen it`s better days, but I`ll have keyboardists and sound techs from other acts tell me all the time how they love how she sounds”

Playing with Dustin Evans has given Tim the opportunity to share the stage with a great deal of different acts. They have been the opener for several Country and Rock acts including:

Huey Lewis and the News, Doobie Brothers, Travis Tritt, Clint Black, Charlie Daniels Band, Sawyer Brown, Chris Ledoux, Terri Clark, Sara Evans, The Temptations, Sugar Ray, Neal McCoy, Keith Urban, Toby Keith, Montgomery Gentry, Trace Adkins, Jo Dee Messina, Jerrod Niemann, Lee Brice, Dierks Bently, Diamond Rio, Zac Brown Band, and many others. “Getting to meet some of my idols and watching them up close and sometimes even from the stage has been the coolest part of my journey” “Watching and meeting players like Taz from CDB, Billy Powell from Skynyrd and Neal Doughty from REO, Sean from Huey Lewis or great women players like Becky Priest (also a Hammond endorsee) from Neal McCoy and even having Jerry Corbetta from Sugarloaf use MY gear for a set and watched him crush “Green Eyed Lady”…it`s been a blast!