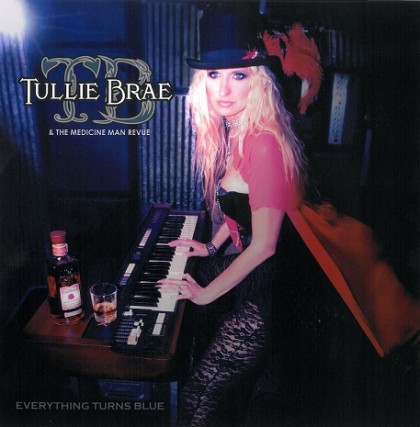 Critics and peers alike agree that Tullie Brae has the praiseworthy vocal distinction and stage charisma that creates an unforgettable show.

The soulful blues singer and multi-instrumentalist credits her gift to her roots in gospel music, like so many great blues and soul singers before her.  Her musical journey started when she began singing in a Apostolic church where her dad was pastor in Louisiana.  She played piano, organ, drums, and guitar and early on assumed the role of choir director.  Her artistic reputation grew within the gospel community, which led to touring professionally with gospel groups.

Not only are Tullie’s influences steeped in gospel music, while traveling and performing she was influenced by the sounds of Blues, Soul, Country and Rock N Roll.  If you were privy to Tullie’s ipod “favorites”, you would discover a broad spectrum of musical genres and eras.  A few of the legendary artists include Etta James, Elvis Presley, Adele, Howlin’ Wolf, Janis Joplin, Muddy Waters, R.L. Burnside, Joe Bonamassa, Melissa Etheridge, John Mayer, Willie Mae “Big Mama” Thornton and Paul Thorn.

You might have recently seen Tullie touring with her band “The Medicine Man Revue” playing on the Main Stage at the Kign Biscuit Festival.  You might have also seen her playing the Garvin Gate Festival, Juke Joint Festival Smoke on the Water, just to name a few.  She has also headlined multiple club dates such as Hard Rock Café, B.B. King’s, Slippery Noodle, BBs Lawnside, Club Ebony while performing on television and radio.  While on tour she has opened for the King himself, B.B. King and has shared the stage iwht muitple artist such as Paul Thorn, Taj Mahal, Bonnie Raitt, Ruthie Foster, Chicago Rhythm and Blues Kings, Bobby Rush, Cedric Burnside, Lightning Malcolm, Jimbo Mathis, Jimmy Thackery, Big Jack Johnson, Terry “Harmonica” Bean and many more talented artists.

You will see and fell Tullie’s heart and soul during her performances, whether it is her original material or a cover that has been “tullieized”.  We only hope to share her lasting gift with everyone who wants an authentic and powerful show.