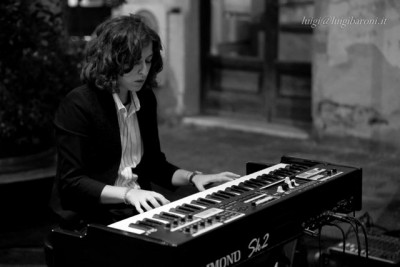 “Nowadays Hammond instruments give you the key to every situation.

The SK2 is the perfect combination of quality, portability and versatility. It has very good extra voices samples I can successfully use in funk, R&B and soul bands. But the main feature is the outstanding Hammond Organ sound that really makes the difference. It is very close to a vintage Organ from the lowest notes to the highest, so I can have a good feeling both on a walking bass either with a full-organ section. That’s why even when I play in a straight Jazz organ band SK2 is right the perfect Hammond stage keyboard I can play. – I’m very proud to be part of this team.”

Valentina Bartoli is an italian Jazz organ and keyboards player. Since she was 12 years old she devoted herself to the study of the Hammond Organ which she has always preferred to the piano right from the beginning.

Still in her teens she started to play professionally in different blues, jazz and funky bands with whom she has been appearing in many festivals such as Pistoia Blues Festival 2008, 2009, 2011, Santa Cruz Festival de Tenerife 2011, Porretta Soul Festival 2012 and Aosta Blues&Soul Festival 2013.

She has a steady funky-pop female band The Real Mother Funkers and above all she does an intensive activity as freelance jazz organist playing with international musicians such as Vince Vallicelli, Sidney Guitar Crusher, David Schintter, Dr. Marvin Boogaloo Smith, Josephine Cuevas, Franco Santarnecchi, Nico Gori and many more.

Early this year she toured in Mozambique and participated to the recording of the second album of Indaba, The Sacred Story of the Tree of Life at the Bom Dia Studios at Inhambane.

On December 2013 she graduated at the University of Florence.