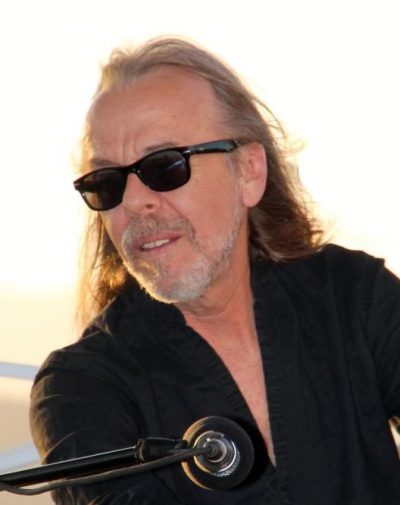 Wayne plays the B-3

Wayne Sharp was born on the Louisiana bayous, south of New Orleans, in the small town of Houma. His love of music starts with his mother, Gardeline “Meno”.  “She had an incredible ear and could play anything that she heard or imagined.”  It was an older sister, Dianna, who first put his hands on the keys.  He grew up listening to the grooves and melodies that were coming out of New Orleans, a great melting pot of styles in the Creole tradition.

As a teen, he moved with his family to the coast of Mississippi and started playing professionally at 17.  His first gig was playing from 9pm till 3am, 7 days a week for 13 months!  He still craved the music that really moved him.  He would go to the black clubs in town to jam and get side gigs behind anyone who was playing the sounds he loved. It was here that he met Jaimoe {Allman Bros.} and Lamar Williams {Allman Bros}.  “I got into a circle of players who were backing everyone who was on the Chitlin Circuit at that time”… Wayne worked in Macon, GA alongside Jackie Avery and Anthony Dorsey.  Avery has written for just about everyone….Chi-Lites, Otis Redding, Johnny Taylor…on and on…”I respect Jackie’s artistic sensibilities to the utmost…that man, is, music!”  Tony “Bone” Dorsey, is another genius at arrangement and production, hence, he’s the only person to produce Paul McCartney other than Paul McCartney.

After a few years in Macon, Sharp headed out to Los Angeles to start his own band of music.  He secured a production deal on the songs he wrote and approached friends, Jaimoe and Lamar, about joining him on the project.  They had left the Allman Brothers and Sea Level to join forces with Wayne to form the original SHARPSHOOTER BAND.  After landing a development deal with Capitol Records Inc., he had the opportunity to record live and make record demos with the likes of Andy Johns and Ed Cherney.  The band put a tour together to road-test the material when Lamar became ill.  He passed within the year.  Jaimoe went back to the Allman Brothers and Wayne joined Elvin Bishop.

Within a year, Wayne got the call to join Michael Burks at Alligator Records, putting a promising solo career on hold and never looking back until Burks’ untimely passing in 2012.   He began with Michael Burks in 2000 and played over 2500 shows with him from Mississippi to Minsk.  During Wayne’s career with Michael Burks, they received 14 Blues Music Awards nominations on a total of 4 albums for Alligator Records.  They won two awards in 2013; Blues Album of the Year and Contemporary Blues Album.  “Playing with Michael was really an incredible ride”….”Our music took me where every player wants to go”….”Michael never told me what to play or ever said what not to play….it don’t get any better than that”.  During his tenure with Burks, Sharp represented the United States in Rudalstadt, Germany’s “Magic Keys” World Festival playing Hammond B3 organ.  He also appears on the debut and second album released by Marqise Knox on APO Records.  The second release, “Here I AM”, placed in the top ten songs on the B.B. King Radio Show.  After Burks’ passing, Wayne rekindled his solo career.  Along with his musician sons and other highly talented artists, he formed THE SHARPSHOOTER BAND, releasing their album, “Living With The Blues” in 2013.  Wayne also decided to bring to life an idea that Gregg Allman gave him, creating The Mushroom Brotherhood, a stunning recreation of The Allman Brothers Band taking the stage in 1971 at The Fillmore East, delivering note for note, with amazing visuals.