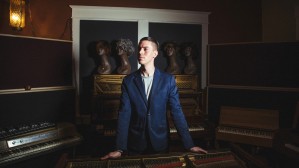 My name is Zach Vinson. There was a time that I would have written a bio like this in third person, thinking it would have a greater sense of authority or legitimacy, but those days are gone now. Or at least, they are usually gone.

I was reading a book recently where one of the characters declares, “I do not understand one thing in this world. Not one.” The longer that I’m here, the more that sounds about right to me.

This life is a strange thing. Strange and beautiful and terrifying and wonderful, and usually all at the same time, if we have the eyes to see it or the ears to hear it.

In a roundabout way, I think that’s why I make music: to attempt to work out, if only for my own soul’s sake, the tension stretched taut across every moment of every day. And, as far as I can tell, these are the skills I’ve been given, for better or worse.

I should probably add in a few of the things that people look for when they read a bio.

—I grew up just outside of Sheboygan, Wisconsin, and I started playing piano when I was 8. I mostly hated it.

—At 14, I joined my first band and played with those guys until I was 19, moving to Boston with them after high school.

—At 19, I moved to Michigan and started playing a few songs of my own, but I was too afraid to sing them for anyone.

—At 20, I put out my first solo album under the moniker Aching Wings. It sold out, but probably more due to the kindness of my friends and family than anything else.

—At 21, I decided to make a go of this, whatever “this” is. I started performing under my own name, not because I love seeing my name all over the place, but because I couldn’t find a band name that I was confident I would still like a few years down the road.

—At 22, the album Cracked Open was released.

—At 24, we moved to Nashville, Tennessee. That’s where we are still, and we’re very thankful for our life here.

—At 25, the album The Streets Will Turn to Streams was released.

—Also at 25, I slipped into a deep and dark crevice of the heart, losing all sense of why I was making this music or if it was worth all the trouble of continuing to make it.

I’m 27 now, having floundered around in the dark for most of the last couple years. The days have started to come easier now. Some things make more sense. Others are still mysterious.

A new batch of songs is finally taking shape. They are drenched in a 1906 Steinway grand piano, an ache for a home, and a weariness of the bones, and they are electrified to life by a quivering current of energy that flows up and through and around the whole thing.

I guess at its base it is piano rock. It’s a little bit weird, a little bit quirky, at times. But there isn’t much trickery to it. I try to stay away from things like synthesizers and auto-tune.

I’d rather just stand up in front of you and do my best with the fingers and voice I’ve been given, and hope that the honesty of that can be the “hello” of a new conversation.